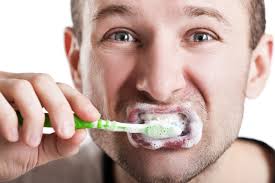 “Brush your teeth twice daily”, this line as an instruction has been read and heard by every child who has not been sleeping in his classes all his childhood. According to a psychological fact, people you meet notice your teeth first and people having a good smile are the people who make a mark when it comes to the social front.

Being successful socially is extremely important these days because society you live in is something that has the power to keep you mind at peace and also has the power to take away all the peace from you. Coming back to the topic, general conception regarding brushing is that it keeps the teeth and gums healthy, but according to many researches in the countries like Germany it is also related to your cardiac health and also to arthritis.

Your gum health goes hand in hand with your heart health. This might sound awkward but after examining around 120 patients in Germany it was concluded that brushing less than two times a day actually increases your chances of getting a heart attack.

The main idea behind this is the germs of the gums do get into the blood stream severely infecting the valves of the heart, though this theory has not been proven yet but the logic says it to be correct. Many people have been taken up for the experiment and all out of all have been a victim of low immune system.

The relation between arthritis and gum disease is inflammation. Actually it has been observed that people having arthritis have eight times more probability to have a gum disease too. The scientists are yet mot sure what is the cause and what the effect are but they are indeed related. It has been found that the bacterium that causes gums problems ‘porphyromonas gingivalis’ is also an agent to increase the severity of rheumatoid arthritis.

Now the inflammation point, a disease like RA is an autoimmune disease. It triggers the immune system which in turn triggers inflammation, which is a protective weapon of immune system. As there are no germs to fight from it increases the severity of RA. Decreasing the effect of inflammation by better dental care can actually help in reducing RA.

It is amazing that how our entire body organs might not seem but are linked with each other, neglecting one might cause an adverse effect on something else. As it is oral hygiene is an issue that is needed to be taken care of because once they’re beautiful pearls change, they change for bad. It is needed to understand that plaque, a jelly like substance that sticks to our teeth when we don’t brush is the biggest enemy of our teeth.

Good teeth relates to good smile that in turn relates to a very good personality. Many times it is seen that people keep on running behind the cosmetics that make them beautiful for a short term but we also need to maintain the beauty that god has given to us.